Be it house or new age ambient, Andrew Wilson, AKA Andras, conveys a sense of open emotion in his music. Out now on Beats In Space, Joyful continues in this vein, while breaking new ground as the Australian producer bares more of his soul than ever before with a deep dig into his personal record collection. It isn’t an exercise in nostalgia per se, rather a tender and heartfelt appreciation of genres from music’s past.

The new album procures samples encountered in the halcyon days of Wilson’s youth, drawing from trance and folk for a sound that emanates a warmth almost beatific. It’s deeply affecting music, all lightness of touch and wide-eyed melodicism. Listening to the first track, you quickly find yourself realising all the playfulness of previous work remains, the artistry of his sampling understated. More sincere, possibly his most mature effort to date, but it never takes itself too seriously in the pursuit of unadulterated bliss. Talking acid house, procuring samples and thinking outside the box, we caught up with Wilson to find out a bit more.

For anyone who might find it tenuous, can you explain the link between ‘70s folk and ‘90s dance music.

It is tenuous. Musically, folk and acid house are disparate; but they both expanded against a background of what the cultural historians would term ‘summers of love’. They became avenues for electronic sound and eastern influence to find a place in music. Lyrical comparisons are fun to make; a line like “Feelings go up […] and come down” seemed to me equally applicable to someone pouring their heart out on a folk record or high on molly in a warehouse.

What gave you the idea to reprogram or repurpose folk motifs for this ‘90s-leaning house sound?

Most of the records I have kept for ‘sentimental’ value are either private issue folk albums or early melodic trance singles. Seeing Ian Van Dahl side to side with Ted Lucas is just too stupid to not laugh at. The first demo I made for Joyful was an edit of a folk song played at 45rpm with a filthy bassline and a kick-drum underneath it. It was dumb but still makes me grin ear to ear. Then I tried some other techniques: re-voicing the lyrics with a computer, sequencing guitar melodies for synthesizers: there was lots of stuff to try. Joyful started from a good sense of humour, and slowly developed into something much more sincere. I was looking for a fun way to incorporate my favourite sounds into a electronic DJ set.

Are there any artists doing similar that you admire? Bullion springs to mind as someone regularly combining humour and sincerity.

Bullion! Totally! ‘Blue Pedro’ is an absolute gull’s egg of a song. Blew my mind when I first heard it – I have a latent obsession with sea shantys and was blown away that he found a way to one club style. What a genius.    Also deeply love Mr. Tophat’s productions and lots of the music being made by the other friendly Swedes (Studio Barnhus people, Samo DJ, Baba Stiltz).

How did you procure the samples heard on the record? I can hear quite a few, but the strings on ‘Live Forever’ really stand out.

The strings and vocals are from recordings close to my heart. Major key but minor tradition. Some are from lesser known Hungarian and Australian recordings and some are totally bombastic mainstream classical. The main vocal sample on ‘Live Forever’ is licensed from Shira Small, who recorded a wonderful folk record aged only sixteen at a Quaker boarding school in Pennsylvania in 1974. The remaining vocal samples on my album are voiced by the inbuilt Mac OS speech generators.

Those strings almost crescendo like some euphoric ‘90s house track. Was that a progression that happens naturally in the original song?

Have you always enjoyed sampling? We know you first caught RBMA’s attention with your sample-heavy MPC jams.

I use sampling and re-sampling heavily as a production technique. But for many years after RBMA I stopped sampling like a ‘crate digger’. It seemed a fool’s errand to hunt for foreign breaks and then try and build music with personal meaning here in Australia. I made me sad and embarrassed to see Melbourne producers sampling James Brown for Oz Hip Hop productions.

House of Dad marked a return to my sampling of recognisable sections of audio; lifting music from my Father’s plumbing instruction videos and home tape recordings. I also return to the ‘classics’ from time to time for political (or comic) effect. With Boom Boom I sampled the in-built sound effects from a portable bluetooth speaker – the sampling there was culturally motivated. But the samples on Joyful mainly perform a personal narrative (and nostalgic) function.

In your ‘Breaking Through’ feature from 2014, Resident Advisor said “Primitive hardware, straightforward methods and a relaxed attitude are the key ingredients in Andras Fox’s sound.” How true is that now?

Almost the inverse is true now. I still use tape and springs and bottle caps and all kinds of junk equipment but my process is very indirect these days. I tie myself up in knots. I actively seek a meandering path from A to B. I am full of nervous energy and have a hard time relaxing.

As someone clearly unafraid to think outside the box when procuring samples, do you have any advice for aspiring producers lacking the confidence to trust their ingenuity?

Tread lightly and move fast – kinda like running on ooblek. The idea to use a tiny loop, melody, tid-bit from the telly will usually arrive unannounced. Try and get it down quickly and keep moving. There are Australian funk records you can cut up for breaks. There are children’s records you can cut up for breaks. All the classics can take a holiday (unless you’re directly making self-reflexive rave music). Xylocaine is the Australian king of daytime-TV-sampling in my opinion. Some of his releases on Bloody Fist Records (Newcastle, AU) will have you in tears of joy and disgust. Also this video of a young Tom Ellard (from Severed Heads) is awesome inspiration.

The album feels optimistic and wide-eyed but also steeped in melancholy with a wistful sort of yearning. Was this purely a stylistic choice, or the product of something more personal?

Joyful is just that. A warm hum, pads, melodies. I have let colour back into my life and my music.

Listening to Shira Small, that juxtaposition of the hopeful and joyous with the sombre is very much present.

Shira was 15 when she wrote the songs and 16 when she recorded them yet she already had such incredible curiosity for the universe, transcendental meditation and the mysteries of mathematics. Youth has it all. Joy isn’t something we can find or hold onto, it’s something always have and always loose. 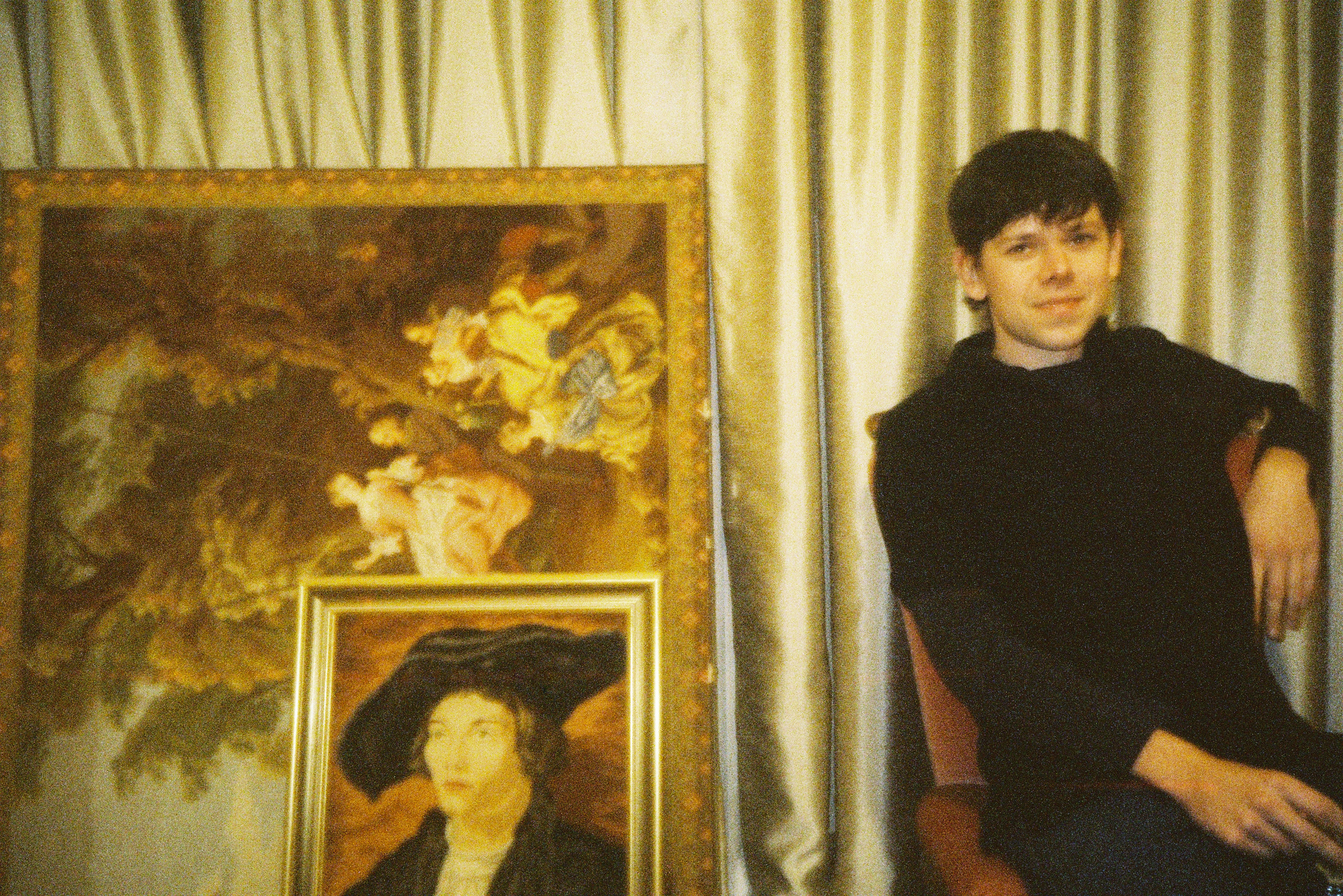 ‘Your Life’ was the first time I heard your music, and nothing I’ve heard since has been void of that same warmth. What is it that informs this approach and stylistic choice?

I’m addicted to love. Hold my hair back I’m going to spew.

Imbued with a pastoral charm, the album feels like it’s defined by a sense of place but is this evocative of your own surroundings or channelled through the folk elements? Which other ‘70s folk artists have influenced the making of this record?

Alongide John Fahey, Robbie Basho and related American artists, there are plenty of Australian folk acts like Kanguru, Megan Sue Hicks, Phyl Lobl and all of the projects Richard Lockwood had a hand in.

Having bought hard house and trance records in your early teens, what do you think your thirteen-year-old self would think of this release?

And finally, what’s next on the agenda for Andras?

I am making something very bassy and percussion heavy for the DJs. It will be warped, wonky and loud. My future is bumpy.

Joyful is out now on Beats In Space – buy it here