Bringing Gooooose and DJ Scotch Egg together was a stroke of genius. On paper, they belong to disparate scenes – the former, a long-standing member of China’s experimental rock scene turned intrepid explorer of rhythm; the latter, a Gameboy-obsessed exponent of chiptune and gabber from Japan – but in collaboration, they feel like two sides of the same coin. Shipping Scotch Egg to Shanghai for a week-long studio session after a chance meeting at Nyge Nyge Festival, the high-flying SVBKVLT label deserves praise for making it happen.

JAC, an 8-tracker sporting remixes from Slikback and Seven Orbits & TSVI, was the byproduct of two maniacal souls working in tandem. Between the title track’s breakcore-juke freneticism and immersive choral swells of ‘Altered Destiny’, this is a triumphant collaboration, one that brings out the best in each other. Another boundary-pushing effort from the SVBKVLT production line, the duo linked up again to chat side-projects, plug-ins, pork belly recipes and more.

Scotch Egg: So when did you start making electronic music, and what made you start?

Gooooose: From 2011, I think. It’s hard to say what made me start making electronic music. I guess the same reason I start to make any music, it’s something inside I can’t control.

G: It’s called Duck Fight Goose. I play guitar, synth, computer and do vocals. The music is totally different from my own stuff, a mix of everything, from early techno-ish stuff to dubby textures. We like to keep our band and solo project separate. I guess each project releases different sides to our personalities.

Wow, you’re also singing!! Yeahh!! Some of the rhythms and structure are quite complicated. I guess you bring the rhythmic technique, and maybe understanding how to play real instruments helps to compose electronic music as Goooose? Or maybe you bring this understanding of composition techniques from playing in a band into the Goooose output. Maybe that’s one of things that makes Gooooose interesting! Does this make sense? Haha.

G: Yeah at the beginning all the ideas were all mixed. I would keep writing new stuff then later decide which one will suit the band more, and all the weird ones were left for Gooooose. But now I tend to think about the band and solo project separately. Sometimes mixing things too much will mess up peoples’ brains. Some people liked it though.

I’m always curious how you feel about living in Berlin for years and in Uganda for several months as a person born in Japan. I mean, I always feel familiar when I have to live in another city, because my whole family is from all over China and I moved to several places when I was young. Being a stranger makes me relaxed. What about you?

SE: Yes, it is nice to live in somewhere you never experienced, different cities inspire me just by living there. Relaxing has definitely been stranger but at the same time you meet new people and learn a new culture, so quite intense too! But in this way you learn something!

G: Have you made some progress practicing FM synth since we met?

SE: Yes I have! It was funny that i used a lot of FM synth sound but I didn’t know what FM synth was till I met you! You taught me the concept and everything about it! I was in love with it after you showed me! Wanna send you a new idea where I was working with FM synth, and would love to make/jam more music with you with this concept!

G: I recently watched an older documentary called Tokyo Noise, from 2002. Several interesting points there, and I just want to ask you if you agree. In the documentary, there’s a guy saying something along the lines of how Japanese people think the relationship of machine and human actually feels closer than person to person. Do you think so? Because that’s what I kind of feel now in China.

SE: Ah I never watched this documentary! I’ll have to watch it!

G: Another thing I always wanted to ask, I feel your production has a unique tone. It sounds like earlier electronic music, of course in a good way. Like a used keyboard made with white ABS plastic, caked in dirt still being used by the owner everyday. I really like that feel of an old, worn-out computer keyboard and your production sometimes conjures an image of that. How did that happen?

SE: Ah interesting! I never thought about this. I use anything, things I have… It doesn’t matter what it is, it can be a Casio keyboard, guitar, an analogue keyboard, a Gameboy, bongos, Abelton, or I can even hit the stuff in the kitchen to make music!

Do you mean any specific tracks? And which era? The ‘90s?

G: For example, some of the tracks that you mixed in JAC. And yes, around the ‘90s. I just really like the sound from that time.

I don’t know exactly. Probably ‘…Baby One More Time’ by Britney Spears. There’s something raw in your production style that reminds me of early electronic music that isn’t overly polished in the way modern production often is.

SE: I love that song! I also love ‘Toxic’ by Britney Spears!

When I visited China you showed me an Ableton plug-in you made using Max/MSP. Have you made more??

G: Yeah, I’ve been running this Max/MSP and Max for live online shop with my friend Wang Changcun since last year. It’s called Sequencer Electronics, and we’ve already put around 15 plugins out. I’ll send you some interesting ones.

SE: Ohh yes please, would love to try out.

For me Max/MSP was very complicated but you were very good explaining how to use your plugin! Also I heard you sometimes teach? Do you enjoy it? Are you interested in becoming a lecturer or a professor of music technology someday??

G: Man, it’s not complicated at all, just takes a bit patience [see Gooooose’s plug-ins in action here]. It’s the same as having to find a way to crack video games on an old PC. Yeah, I enjoy holding workshops and teaching a bit, I like to bullshit a lot when teaching, some find it interesting, some feel distracted. I’m not sure about serious teaching, but if they pay right maybe I’ll consider, haha! 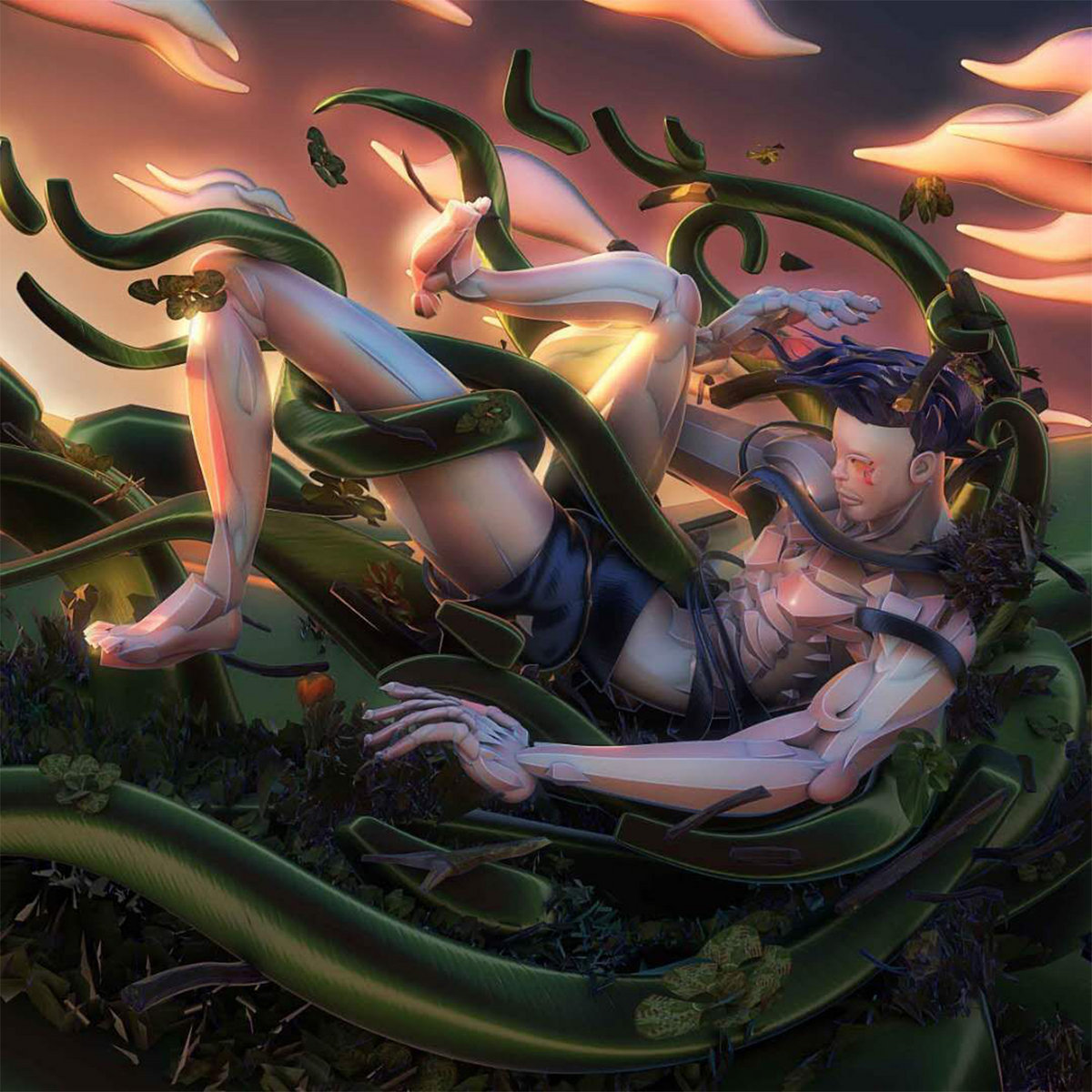 G: I know you are good at making pancakes. Is there any other food that you are also good at cooking?

SE: Yes, I love cooking! We have a food stand in Berlin and we sell okonomiyaki! We are called Samurai Spoon! Please visit us when you come to Berlin! (haha, advertising!!)

I can cook different styles of Japanese food, but my speciality is cold noodles! I eat a lot of this when it’s summertime and hot, so it’s what I cook when guests come to stay in summer time! Can do a vegan option no problem!

SE: Ohh sickkk! Let me cook for you when you guys come!

What is your favourite food? Like nationality. For example, mine are Japanese, Chinese and Italian.

G: My favourite food is mostly from Japan and China. Oh and Malaysia. I used to only eat Malaysian-style curry beef for a week, then I told myself man you have to stop. But I still order it from time to time. I can eat ramen everyday though.

SE: Ohh this sounds interesting. Do you put anything else in? Like soya sauce etc.? Any stock (like fish stock?) Slow cook I guess? We have maybe a similar way to cook this in Japan using pork belly, but I think we learn from the Chinese way to cook it. We mix with soya sauce, mirin (sugar and sake mixed), sugar, ginger, spring onion and slow cook.

G: That pork belly sounds delicious man… Slow cook indeed. Sometimes I will stare at the soup for a while until it fully boils, then shutdown the kitchen and let it cook for 30 to 40 mins, then redo the process. It helps if you stare at them. I mostly cook plain soup, like in the end the soup has to be transparent, otherwise I always feel there’s something wrong with the process – either I overcooked it, or the ingredients are not quite right. Then I will dip things from the soup with soy sauce, I love soy sauce. Some people from Fujian province in China will dip lychee or watermelon with soy sauce. I tried, it’s a pretty interesting flavour. They say it’s kind of like sashimi if you dip Dorion with soy sauce… I need to try it.

SE: So what are you getting up to in the near future?

SE: What do you mean by environment sound?

G: I guess I mean sounds that will intensify the feel of certain environments. Like, when you listen to music, certain tracks could build a vibe or atmosphere more easily than others.

SE: I’m making an album for Nygenyge Tapes using material I recorded with a percussionist during my Ugandan residency in 2019, and another new album for WaqWaq Kingdom. Also stopped smoking and drinking less alcohol, so trying to get healthy this year!

JAC is out now on SVBKVLT | Buy it here